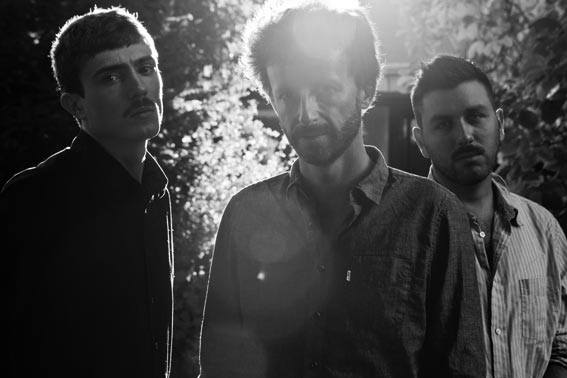 Third Reel is a collective project founded by guitarist Roberto Pianca (from Lugano) and reedist Nicolas Masson (from Geneva) in 2009. The two had the chance to know each other’s work through MySpace. After some time sharing ideas and playing with different drummers, in 2010 drummer/pianist Emanuele Maniscalco was invited by Pianca to become a steady member of the band. Since then, the trio has recorded two full albums for the German jazz/contemporary label ECM and played in some of the most relevant jazz venues in Europe, both clubs (B-Flat in Berlin, Moods in Zurich, AMR Sud des Alpes in Geneva…) and festivals (Willisau, Clusone, Schaffhausen, Tra jazz e nuove musiche – Swiss-Italian State Radio). After releasing the second album, the trio started playing and touring with the extraordinary improviser Thomas Morgan on double-bass. This is the band’s first tour in Scandinavia.

A collaborative group brimming with creative potential, Third Reel packs much musical information into the sixteen vividly expressive tracks of its debut album. Trio members Nicolas Masson, Roberto Pianca and Emanuele Mansacalco are committed improvisers and gifted writers, each with a distinct compositional signature. The contrasts, and a shared sensitivity for space, shape the group’s sonic identity.

“Often we’re playing around the beautiful melodies that Emanuele brings along”, says Masson, characterizing their diverse methods. “Roberto’s pieces are frequently concerned with the exploration of chordal colours, and my own writing tends to be contrapuntal.” Third Reel’s album was recorded at Auditorio Radiotelevisione svizzera, Lugano, last February with Manfred Eicher producing. “The very pure sound in the recording room in Lugano definitely contributed to the way the album evolved. It was almost like having a fourth member of the band. That level of clarity encouraged us to aim for, as far as possible, a ‘perfect’ version of each tune, with no unnecessary embellishment.”

Each member of this Swiss-Italian trio is a bandleader is his own right but the cooperative Third Reel is a priority for all of them. A thoroughly modern proposal, the group was casually hatched via social networking: Masson calls its coming together “the first and only good thing that came out of having a MySpace account.” Roberto Pianca ‘befriended’ him after visiting his page and in turn, Masson checked out Pianca’s homepage, recognised a kindred spirit from music samples posted there and left a message on his bulletin board. Soon Pianca was travelling from Lugano to Geneva to jam. Conceived as a trio without bass from the outset – “it means more responsibility for each player, as well as more risk-taking” – Third Reel went through various drummers until Pianca brought along Emanuele Maniscalco in 2010 (drummer and guitarist had previously collaborated in the band Food Chain). Masson: “We had a fantastic concert with very little preparation, freely improvising together, and we knew at once that he was the right player for the band.”

Born in Brescia in 1983, and largely self-taught, Maniscalco took up piano at eight and drums at twelve. While still in his teens he impressed Enrico Rava at a gig in Siena, was drafted into the trumpeter’s workshop band, and ended up drumming regularly with Enrico between 2004 and 2007. He has also played extensively with Stefano Battaglia and occasionally with other leading figures of the new Italian jazz scene, such as Stefano Bollani, Gianluca Petrella. and Giovanni Guidi (he played on Guidi’s critically-heralded trio album “Tomorrow Never Knows”). In recent years he has recommitted himself to the piano and today splits his time between the two instruments. Maniscalco’s current projects include a new duo with US bassist Thomas Morgan. His albums as a leader on other labels include “From Time To Time – The Music of Paul Motian” for El Gallo Rojo Records, “Maniscalco/Bigoni/Solborg” for the Danish improvisers’ collective/label ILK, and “From Solesmes to Solanas”, a self-produced solo piano album.

Nicolas Masson’s bold and resolute tenor sax variously fronts Third Reel’s sound, hews closely to the guitar lines or agitates inside the group texture. “In this group you can take chances and know that you can trust your colleagues to support you and develop the musical ideas that arise.”
Masson, born 1972, dived into improvised music at the deep end, at 20 encountering Cecil Taylor and J. R. Mitchell in New York and subsequently studying with Frank Lowe and Makanda Ken McIntyre. “It gave me insights into the relationship of free playing and the jazz tradition that might otherwise have been difficult to access as a European.” Back in Geneva he studied at the Conservatoire Populaire de Musique and took masterclasses with Lee Konitz, Dave Douglas and Misha Mengelberg. Most of his own bands have been international in line-up and he made his recording debut as a leader with his New York quartet with Russ Johnson, Eivind Opsvik and Mark Ferber. Later incarnations of the quartet featured Gerald Cleaver and Ted Poor. His band Parallels with Colin Vallon, Patrice Moret and Lionel Friedli recorded for Clean Feed in 2009, and the following year, he assembled a new band with Ben Monder, Patrice Moret and Ted Poor. A leading figure on the Swiss new jazz scene, Masson has worked with a broad international cast of musicians including Kenny Wheeler, Josh Roseman, Kris Davis, Otomo Yoshihide, Tom Arthurs, Scott DuBois and many more.