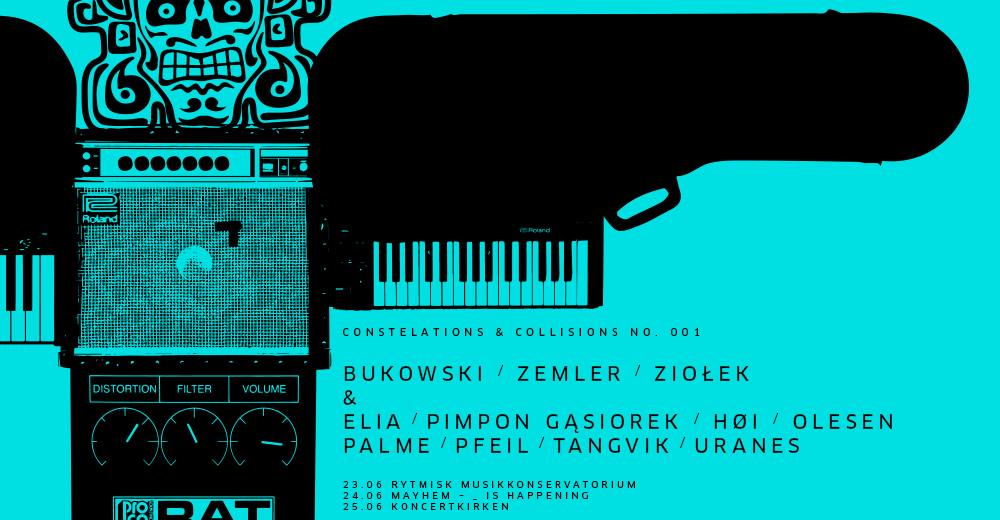 Piotr Bukowski
guitarist, musician, producer. Associated with the Warsaw label Lado ABC and the Bydgoszcz Mileu L’Acephale collective. Between 2006 and 2012, he worked as a composer on theatre productions. Since 2011 is the leader of the experminetal rock band Hokei and the electric trio Xenony. Also member od Duży Jack and Pictorial Candi band’s.
As guitarist he performed alongside many musicians such as Thomas Lehn, Gary Smith, Frederic Blondy, Andrew Sharpley, Axel Dorner, Sophie Angel, David Chevalliere, Luc Ex, Arturas Bumsteinas.
Since 2015, together with operator Kamil Gubala, Kuba Ziolek and writer Andrzej Stasiuk, he has been experimenting with film/music/literature form – „Tutaj“.

Jakub Ziołek
is a guitarist/vocalist/electronic musician and a founding member of art collective Milieu L’Acephale. He is a member of various bands: Stara Rzeka, Innercity Ensemble, Alameda, T’ien Lai, Kapital and others. He presented his music on concerts and festivals in many different parts of the world including New York, London, Stambul, Sao Paulo, Kiev, Reykiavik, Toronto and many others.

Szymon Gąsiorek
is a Copenhagen-based Polish drummer, composer and improviser working within multiple contexts.
Currently studying at Rhythmic Music Conservatory in Copenhagen. He is a leader and co-leader of such bands as: Pimpono Ensemble, The Love And Beauty Seekers, Wood Organization, Gadedrengehop, I Love My Mother, Mother Uraño as well as a part of LOVE, G Bop Orchestra, Franciszek Pospieszalski Sextet and Tomasz Sroczyński Trio.He has co-founded a collective and record label Love & Beauty Music. Involved in organizing DIY festivals and event series as Dźwięko Działka or ‚_is happening’.

Tobias Pfeil
on the guitar, saxophone and voice of God has been seen on stage wearing varying degrees of clothing in the shadiest of European art and jazz clubs.