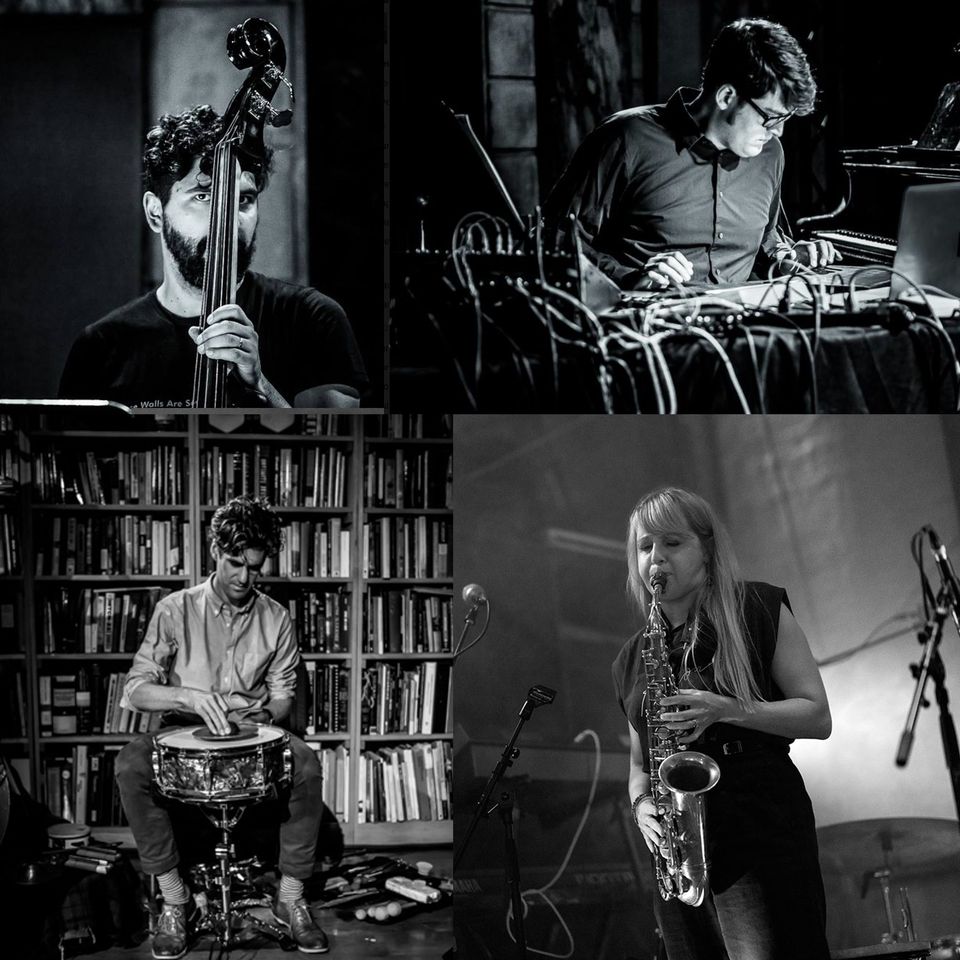 20:30 – Marie Marie
21:30 – Pluta/Windfeld/Blancarte/Jensen
22:30 – The Monday Band
Marie Marie
Marie Daniels (DE) – vocal
Mette Marie Jensen Ørnstrup (DK) – vocal & percussion
Something special happened when these two musicians met in 2016 at Melting Pot Lab, Wroclaw, Poland, and the two vocalists have been in close contact ever since. Between free improvisations and original compositions, Marie Marie uses percussion, gongs, electronics, and spatial acoustics to create a varied soundscape that moves between soft and catchy melodies to booming dissonance.
Marie Daniels lives in Cologne, Germany, and is a regular member of various orchestras, including the quartet h i l d e (recipient of the Carl Dörken Foundation grant) and Marie Mokati, who received the Sparda Jazz Award in 2015. Marie Daniels belongs to two music collectives in North Rhine-Westphalia, PENG e.V. and the Dorf & Umland collective.
Vocalist and percussionist Mette Marie Ørnstrup has explored many musical frontiers, both as an improviser, performer, and global musician. Mette Marie has traveled the world with her music, including a year and a half in Istanbul, where she studied classical Ottoman music and singing at the Academy. With one foot in free improvisation and one in world music, Mette Marie offers a wide range of musical landscapes and structures.
Pluta/Windfeld/Blancarte/Jensen
Sam Pluta (US) – electronics
Christian Windfeld (DK) – drums
Tom Blancarte (US) – upright bass & euphonium
Louise Dam Eckardt Jensen (DK/US) – saxophones, flute, alto clarinet, vocal & electronics
A debut performance from a quartet of high-level improvisers with a complex entangling of histories – husband and wife Tom Blancarte and Louise Dam Eckardt have played together in various projects including the duo The Home of Easy Credit, the post-punk band Sweet Banditry, and the Copenhagen-based quartet Tactical Maybe; Sam Pluta and Blancarte played together for years as members of various incarnations of the Peter Evans Ensemble; Jensen and Pluta have played together in various ad hoc groupings while they both lived in New York City; Christian Windfeld and Blancarte played together recenting at Klub Primi as probably the only bass/euphonium + percussion duo in existence; Jensen and Windfeld last played together in various constellations at the 2018 Toftlund Lydfest, while tonight is the first time Windfeld and Pluta have played together – a grouping that promises to deliver a diverse and explosive set of improvisations.
Sam Pluta is a composer and electronics performer whose work explores the intersections between instrumental forces, reactive computerized sound worlds, traditionally notated scores, improvisation, audio-visuals, psycho-acoustic phenomena, and installation-like soundscapes. Since 2009, Sam has served as Technical Director and composing member of Wet Ink Ensemble. He has also received commissions and written music for groups like Yarn/Wire, Ensemble Dal Niente, International Contemporary Ensemble, Mivos Quartet, Mantra Percussion, Spektral Quartet, TAK, and the New York Philharmonic. Laptop improvisation is a core part of Pluta’s artistic practice. Performing on his custom software instrument, he has toured internationally with Rocket Science, the Evan Parker Electro-Acoustic Ensemble, and the Peter Evans Quintet.
Christian Windfeld, b.1983, is a Danish Improviser, Composer, Percussionist and educated soloist from The Royal Academy of Music in Aarhus, Denmark. Since the age of 19 he has built an international career touring all over Europe, North America and Australia and lived in Stockholm, New York and Berlin. Windfeld has a minimalist but highly expressive approach to the percussive instruments often reducing his set-up to focus on just one instrument e.g. the snare drum to explore its full potential aiming to transcend the general perception of its capabilities.
Louise Dam Eckardt Jensen is a Danish-American saxophonist, composer and a multi-instrumentalist who lived in Amsterdam, Berlin and New York for over a decade. She is a graduate of both The Music Conservatory of Amsterdam and The Rhythmic Conservatory of Music in Copenhagen. Today, she lives in Denmark, and continues to lead her own local and international ensembles, including the duo The Home of Easy Credit and the improvising punk band Sweet Banditry, as well as to compose for various other ensembles, including Wet Ink Ensemble. She co-runs the label Marsken Records with her husband, Tom Blancarte.
Texan bassist/euphoniumist Tom Blancarte, b. 1979, has cultivated a visceral instrumental practice that transcends the experimental bass canon and pushes improvisatory art to new extremes. As a member of various experimental music groups as well as as a solo performer, he has toured extensively throughout Europe, Japan, and North America, playing venues that range from dingy squatted basements to international festivals. He is also active as an educator and researcher.
The Monday Band
The curator this evening: PJ Fossum.
The Monday Band is a vibrant community which brings the young improvisers in Copenhagen together to play in large ensembles. Originally established in 2017 by Halym Kim and was co-organized together with Eloi Calame and Storm D’Angelo as a part of the legendary Mandagsklubben, the Monday Band became one of the staples of the improvisation scene in Copenhagen and has been dearly missed since it took a hiatus.
Finally, it’s back! This time as a monthly feature at Klub Primi, The Monday Band will gather a different and exciting constellation of improvisers and composers to experiment and create together each time. Sometimes it’s wild, sometimes calm, sometimes loud and sometimes anything you could or couldn’t imagine – and always fun.
Entrance fee: 100 DKK
Free entrance for all students at MGK’s and conservatories in Denmark.