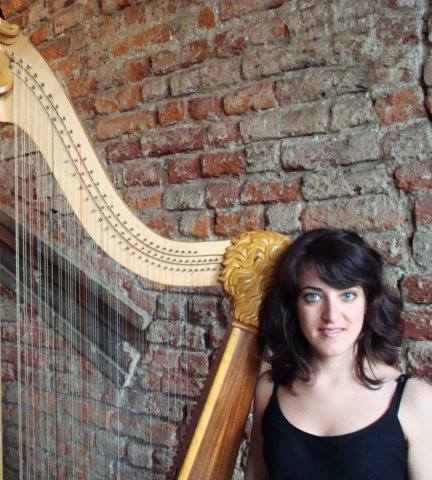 Flora Papadopoulos is a greek born harpist based inMilano, Italy. After her modern harp studies, archieved atthe Conservatory of Parma, she dedicated herself to theearly harps. Thanks to a Marco Fodella Foundationscholarship she purcued her baroque harp studies withMara Galassi at the “Scuola Civica” of Milano, graduatingin her Masters programme with the maximum grades.Her performing career includes both solistic andchamber music projects, as well as collaborations withseveral orchestras and ensembles specialized in a historically informed performanceall over Europe. She has played under the guidance of directors such as A. De Marchi(with Balthasar-Neumann Orchestra and Choir, Freiburg), L.Garcia Alarcòn(Cappella Mediterranea, France), Th. Hengelbrock (NDR Symphonic Orchestra,Hambourg), F. Lasserre (Akademia, France), M. Mencoboni (Canalgrande AdriaticOrchestra, Ancona), M. Chryssikopoulos (Latinitas Nostra, Greece), among manyothers.She has taken part in discographic projects for Brilliant Classics, HarmoniaMundi, MDG.Together with Lathika Vithanage and Noelia Reverte she has founded her owngroup, Il Caleidoscopio, performing in some of the most important Music Festivals ofItaly (Festival Barocco di Roma, Milano Arte-Musica, Festival dell’AccademiaBizantina,Venezze di Rovigo, Gaudete! di Varallo, Anima Mea di Bari, ecc..).She has obtained a Batchelors degree with honours in Liberal Arts at theUniversity of Parma, and a Masters Degree in Musicology at the University “LaSorbonne IV” of Paris, again with honours.

MUSICOLOGICAL NOTES TO THE PROJECT
There is a general lack of repertoire concerning the harp from the twenties ofthe 17th century and for aproximately one century.The survival of multiple strung harps and of their practice is witnessed in manyeuropean areas, however the original pieces for harp that have come to us are veryfew. This means that the harp repertoire was either unwritten, or it’s lost, or,hopefully, it is still to be found.While fervently searching, patiently waiting and hoping in new discoveries,being both a harpist and a scholar I have found it convincing to experiment new paths,that are more personal, empiric and intuitive.It is witnessed that the harp would draw its repertoire from that of other“continuo” instruments, such as harpsichord or lute. My research has broughtevidence that the violin as well shares some idiomatic features with the harp, and thatthe baroque harpists have more than once found inspiration in it’s repertoireTherefore, I experimented the performance of violin pieces on my instrument:while most of the keyboard repertoire of the same period was too difficult or justimpossible on the harp, the violin pieces were immediatly working. This factconvinced me to take all the way down this road, and to arrange those pieces thatchallenge the most the techinical potentials of the violin, and that have beentraditionally associated with its idiom: the compositions by Biber, Bach and Corelli.Next to them I added a beautiful “suite” of dances by Biagio Marini, henceshowcasing a glimpse of the violin literature of the late seventeenth and earlyeighteenth century between Italy and Germany.Once chosen, these pieces were reworked in order to achieve a result thatseems effective on the harp. I took example from the numerous 18th centurytranscriptions of the works by Bach and Corelli arranged for various instruments .This project is in line with a musicological research I’m working on, and thatwill be published soon on one of the most prestigious musicological magazines.