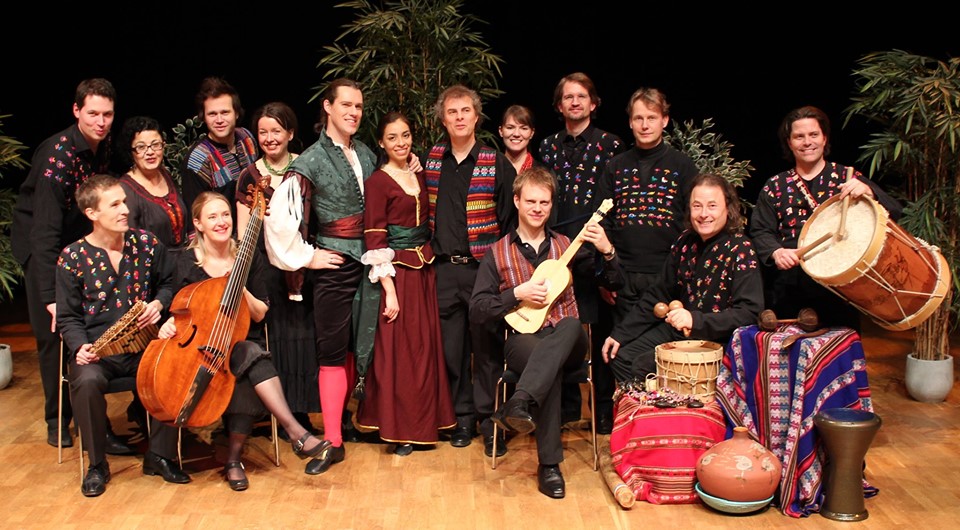 After 24 years of activity, Ensemble Villancico is currently regarded worldwide as one of the most important interpreters of early music from Latin America. In its vibrant performances, its interpretive vitality and first-rank musical capabilities, the ensemble unites the recognized quality of Nordic voices and the spirit of Latin American baroque music.
Ensemble Villancico has performed hundreds of concerts in some thirty countries in Europe and Latin America in programs featuring the repertoire of the Latin American baroque and early music from the Nordic countries. The ensemble has presented itself internationally on television and radio on repeated occasions and has released seven CDs. Ensemble Villancico received the Ivan Lucacic Prize in Varazdin, Croatia, and its CD “Hyhyhy – the New Jungle Book of the Baroque” was nominated for the Swedish Grammis Recording Prize.

It is difficult to define Latin American renaissance or baroque music, since the many pre-colonial Indian cultures had no unifying cultural heritage. One must therefore seek a common denominator in the (sacred) music that the Europeans, as the dominant ethnic unit, imported to the new continent.

The ships bearing the conquistadors probably also had musicians on board, both military and private, who are likely to have introduced western music to the new continent. Soon after the conquerors came the missionaries, impatient to convert the population of these new territories to Christianity. They found that music could help them to quickly convince the Indians to join in Christian daily life and eventually join the faith.

Even though this social and cultural takeover was dictated wholly by the conquerors, it resulted in curious musical blends: compositions written in the formal language of the European renaissance and baroque, but which are coloured here and there by indigenous rhythms or melodies, and which at the same time incorporate the local Indian languages in the text. In fact, only a few decades after Columbus arrived in America in 1492, the newly built Roman Catholic cathedrals in Mexico and Guatemala featured church music sung in Náhuatl and other Indian languages.

The enslaved Africans also affected Latin American baroque music both with their music, rhythms and their own special ways of pronouncing Spanish and Portuguese words. There are many examples of compositions inspired in an African style or based on the dialects of the Africans.

The music, composed and performed in the Latin American Baroque era under the hegemony of Catholicism and the diversity captured in its essence ultimately suggests to us a spirit that may be termed “Early World Music« – to be understood as the ample presence of multi-ethnic values and intercontinental relations in one and the same region.

International press voices
“The art of Villancico blends light and dark, joy and sadness, forming a fresh and brilliant fireworks display that both entertains and enriches. An experience for both the eye and ear.” (Smålandsposten, Sweden)
“Technique and temperament, rhythm and freshness” (El Cóndor, Santiago de Chile)
“Candy for the ears and joy for the eyes” (Augsburger Allgemeine, Augsburg, Germany)
“Colorful, dancing and wonderful; if one had believed that renaissance music is one-sided and boring, they were cured from this during the course of the evening.” (Norrtelje Tidning, Sweden)
“Only the church columns failed to be moved by the ensemble’s spontaneity and clean, airy presentation style” (Svenska Dagbladet, Sweden)
“The absolute high point of the festival so far” (Nordlys, Tromsö, Norway)