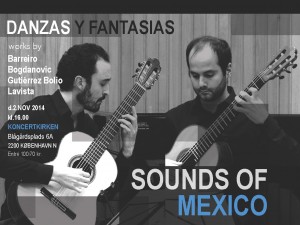 The guitar, a very popular instrument in Mexican folk music, has also lent its voice and its unique world of sound to the diverse languages and styles of the 20th and 21st centuries. In Danzas y Fantasias presents music of a younger generation of Mexican composers that takes off from well-established ones like Mario Lavista, and looks for a voice of its own.  Gutiérrez Bolio and Lascurain will be joined by flutist Sofia Kayaya for the Danish premiere of Hermandad (2011), inspired by the texts of Nobel laureate and Mexico’s dearest writer, Octavio Paz. SOUNDS OF MEXICO is an international platform for the promotion of Mexican classical music (www.soundsofmexico.info)

The duration of the program will be of approx. 60 minutes.  You are welcome to join us for a drink at the bar and a Mexican snack after the concert.

SANTIAGO GUTIÉRREZ BOLIO (Mexico City, 1978) studied composition and performance of classical guitar at Centro de Investigación y Estudios Musicales in Mexico City. He continued his studies at the San Francisco Conservatory of Music in California, where he studied with Dusan Bogdanovic, David Tanenbaum, Marc Teicholz, David Conte & Conrad Susa. In April 2009 he graduated from the Soloist Class at The Royal Danish Academy of Music in Copenhagen, where he completed his studies with Danish guitarist Jesper Sivebæk. He has performed extensively in Europe, the United States and in Mexico, including Carnegie Recital Hall in New York City, Spigelzaal at the Concertgebouw in Amsterdam, Festival Internacional Cervantino XXXIX ed. In Guanajuato, Mexico, Other Minds VII Festival at the Palace of Fine Arts in San Francisco, CA, and Århus International Guitar Festival. His repertoire ranges from improvisation and his own compositions, to Latin American, baroque, renaissance, and contemporary repertoire, both as a soloist and in a chamber music setting. His work has been published by Berben – Edizione Musicali, in Italy, and commissioned by ensembles and performers such as Kammerkoret CAMERATA, Mobius Trio, Duo Inviolata, and David Tanenbaum. In 2008, Santiago developed the project SOUNDS OF MEXICO in collaboration with the Mexican embassy to Denmark, Norway and Iceland – an international platform for the promotion of Mexican classical music and the collaboration between Mexican musicians and artists from other countries. In 2011 Santiago was named one of Mexico’s touristic ambassadors among other artistic personalities who stand out in the promotion of Mexican culture around the world.  In 2013 he released his debut album ‘Water Cycles’ together with Danish percussionist Matias Seibæk under the Danish label Gateway Music

SANTIAGO LASCURAIN (Mexico, 1980) began his classical guitar studies at age 14 with Iván Rísquez, Alejandro Mora and Antonio López. After entering the National School of Music in Mexico in 1996, he won third prize at the Paracho Guitar Festival in Mexico, and in 2005, he received a distictintion prize at the Taxco Guitar Competition in Mexico. In 2002 he obtained a Bachelor degree from the San Francisco Conservatory of Music (USA), where he studied with David Tanenbaum, and in 2005 he moved to The Netherlands. There he received a postgraduate degree at the Maastricht Conservatorium in 2007 and a Master degree at the Royal Conservatory in The Hague in 2009, with Carlo Marchione and Enno Voorhorst, respectively, as his teachers. His final master reaserch presentation on ‘Nocturnal’ by Benjamin Britten earned him a prize at his graduation from the Royal Conservatory. In 2000 he was given a “Performers Grant”, and in 2007 he held a “Grant for international Studies” given by the Mexican Fund for Arts and Culture to outstanding young artists.  As a member of Ensemble Modelo62 –recognized as one of the leading young contemporary music ensembles in The Netherlands, he has toured Norway, Argentina, Belgium and Mexico and has had the wonderful opportunity to take part in the creative processes of composers who have written for the ensemble such as Ezequiel Menalled Claudio Baroni, Hugo Morales, Gilius van Bergeijk, and Diderik Wagenaar, among others. He has performed in Mexico at the Museum of Fine Arts Recital Hall as well as for the National University Radio and at the XXXIX Festival Internacional Cervantino, at the Spiegelzaal in Concertgebouw in The Netherlands, as well as in France, Spain, Finland, Denmark, Iceland and Poland. His solo debut CD ‘20th Century Guitar Recital’ has received outstanding reviews in The Netherlands and Germany.