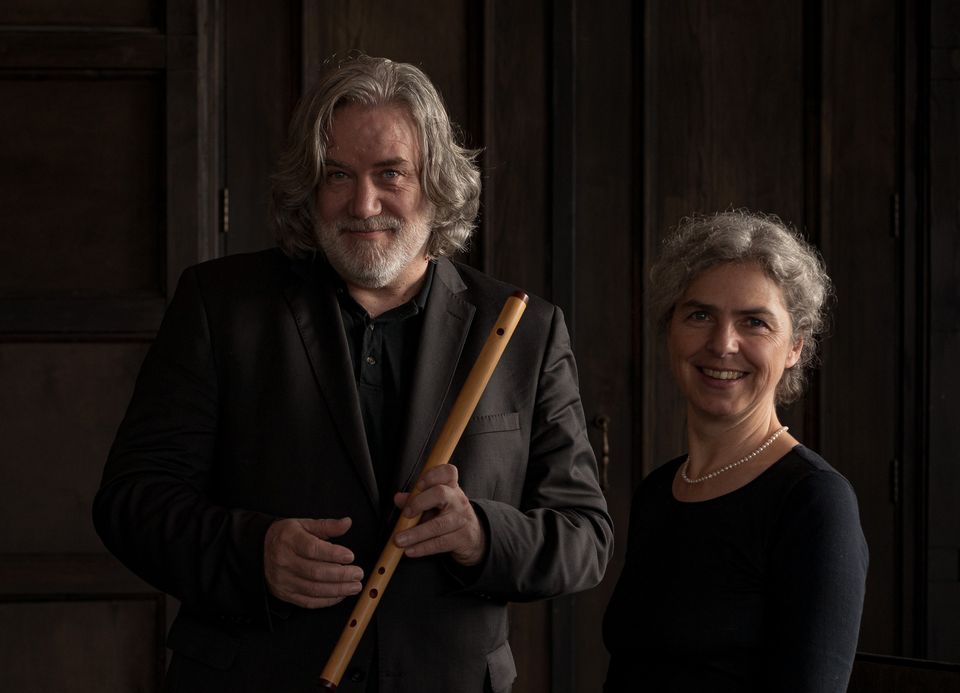 “In Forgotten Tones” – The Sangsprüche of Meister Frauenlob
Sabine Lutzenberger – voice
Norbert Rodenkirchen – flutes
The renown of the medieval poet-singer Heinrich of Meissen, also known as Frauenlob (The Praise of Women), is based not only on his wonderful and wide-ranging opus of extended lays, most prominent the Marienleich, but also on his musically and literally ambitious Sangsprüche, a shorter poetic form in which Frauenlob composed brilliant melodies – socalled tones (“Toene”) to his own lyrical texts.
Many of Heinrich of Meissen’s Sangsprüche delve into more complex philosophical, ethical, and theological concepts rather than dealing with aspects of Minne, courtly love. With this focus on the Sangspruch as a contemplative art form, Meister Frauenlob is closely connected to the medieval mystics, most notably to his contemporary Meister Eckart, the German theologian, philosopher, and mystic. In Forgotten Tones, recorded by Sabine Lutzenberger and Norbert Rodenkirchen, is their second collaboration on CD, which presents Master Frauenlob’s highly regarded music and poetry. Their acclaimed CD, Der Taugenhort des Heinrich von Meissen, has been praised as a seminal recording of this repertoire. The material for In Forgotten Tones was gathered from manuscripts containing original texts and melodies in musical notation among others from the Jena Songbook and the Vienna Frauenlob Manuscript. The songs are augmented by instrumental settings from melodies and melodic fragments from the Minnesang tradition as well as from the sequence Granum Sinapis, which is attributed to Meister Eckart.
Sabine Lutzenberger, for more than 30 years one of the outstanding singers in the field of medieval music and beyond was a longtime member of the ” Ensemble fuer Fruehe Musik, Augsburg. She also collaborated with the French ensemble Millenarium and Mala Punica in Italy. Today, she sings regularly with the Huelgas Ensemble in Belgium and runs her own successful ensemble Per – sonat. She also took part in Sequentia´s groundbreaking work of finishing the CD-box with the complete works of Hildegard von Bingen and is much sought after soloist in various other ensembles.
Norbert Rodenkirchen is a permanent member of Sequentia since 1996 and he is working regularly with the Ensemble Dialogos in Paris as well. He is internationally in demand as a soloist with emphasis on medieval improvisation, especially with his solo program ” Hameln Anno 1284 / Medieval flute music / On the trail of the Pied Piper”. An extensive and intensive cooperation connects him with the Cologne violinist and fiddle virtuoso Albrecht Maurer as well and additionally he works as a composer for experimental theatre.
Both Sabine Lutzenberger and Norbert Rodenkirchen have performed worldwide at the most important festivals for early music. They also recorded numerous CDs with various ensembles. As a duo they collaborate since more than 15 years and found their very own style of medieval duo music in a most reduced setting of voice & flute or harp.