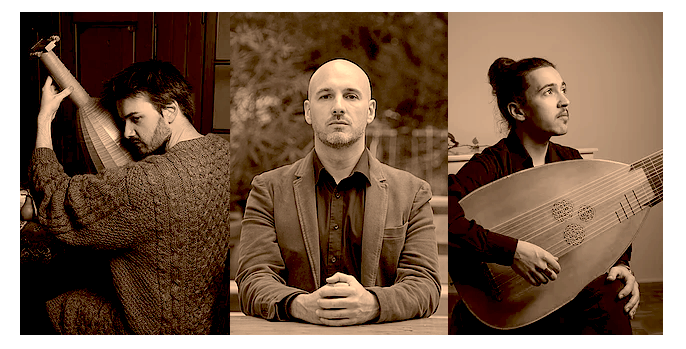 ..or translated, “The first bouquet of flowers, collected from the garden of Bellerofonte” is a collection of music from Bellerofonte Castaldi published in 1623. This concert is a renaissance of several songs from this book, along with music by Francesca Caccini, Girolamo Frescobaldi, Claudio Monteverdi and Hieronymus Kapsberger.

This selection of secular songs and monodies offers a wide palette of affetti: from divine bliss to human joy, and even to despair. Emotions filled with deep moral revelations, existential questions and ecstatic states of love.
The recitar cantando or singing declamation, the richness of virtuosic embellishments and the seductive rhythms are performed by the theorbo, the Baroque guitar and the human voice, giving a sublime sample of the compositional diversity that these masters of the “Primo barocco” cultivated.

Nicolas Lartaun (cl)
Nicolás Lartaun is a singer whose interest in historically informed interpretation takes him from sacred oratory to German song, theater to opera, contemporary music to the Baroque repertoire, and folk and from popular roots to experimental music.
Lartaun made his debut at the Teatro Municipal in Santiago, Chile, in the role of Papageno in Mozart’s Die Zauberflöte. This performance led to subsequent collaborations with conductors such as Gianluca Capuano, Alessandro de Marchi, Rodolfo Fischer, and Deborah York, and stage directors such as Michael Hampe, Ermanno Olmi, Gonzalo Cuadra, and Deda Colonna.
He has since interpreted various roles and performed recitals in many American, European and Asian venues. In 2007 he made his debut at Milan’s Teatro alla Scala in the world premiere of Fabio Vacchi’s opera Teneke under Roberto Abbado.
Nicolás Lartaun was born in Santiago, Chile. After training as a photographer and studying social and audiovisual communication, he worked in television broadcasting and theater.
He received his initial vocal training at the Universidad Católica de Chile under the guidance of Ahlke Scheffelt, with whom he focused on the interpretation of German song.
He continued his studies with Mark Oswald in New York, Vincenzo Manno at the Accademia alla Scala in Milan, and later Margreet Honig in Amsterdam.
He deepened his interest in recitative and the repertoire of the 17th and 18th centuries with teachers such as Eduardo Egüez and Gabriel Garrido in Argentina, Jordi Savall and Vincent Dumestre in Spain, Roberta Invernizzi and Mara Galassi in Italy.

In 2018 he took one of the leading roles in the premiere of the opera Schattenlos, by Margarete Huber, in Berlin. He is currently involved in projects on forgotten repertoire, intercultural sacred music, and contemporary premieres.
www.nicolaslartaun.com

Lukas Henning (de)
Lukas Henning studied at Schola Cantorum Basiliensis, a leading research and teaching institution on the field of historically informed performance practice, where he received his Master of Arts degree in 2016.

He studied Lute and Theorbo under Hopkinson Smith and received additional teaching from various influential scholars and performers such as Crawford Young, Jesper Christensen or Anthony Rooley. Since 2011 Lukas Henning has been performing throughout central and northern Europe.
www.musicamemo.com
Ricardo Leitão Pedro (pt)
Fascinated since childhood by the singer-instrumentalists of Antiquity and their ever-changing incarnations throughout History, Ricardo Leitão Pedro is one of the few musicians today dedicated to the historical practice of singing al liuto, accompanying himself to different early plucked string instruments.
Born in Porto in 1990, he took the lute at the age of eighteen inspired by a concert by Hespérion XXI and encouraged by his classical guitar teacher Pedro Fesch. A year later he was accepted to a bachelor degree in early music at ESMAE (Porto, Portugal), during which he received an Erasmus scholarship to study at the Conservatoire National Supérieur de Musique et Danse de Lyon as student of Eugène Ferré.
In 2013, he moved to Switzerland to continue his studies at the prestigious Schola Cantorum Basiliensis where he is currently finishing a masters degree in singing in the class of Dominique Vellard, after completing a bachelor in medieval and renaissance lutes with Crawford Young and Marc Lewon.
He has taken private lessons and masterclasses with singers such as Margreet Honig, Gerd Türk and Patrizia Bovi as well as lutenists Paul O’Dette, Hopkinson Smith, Eduardo Egüez and Rolf Lislevand.
A member of Concerto di Margherita (EEEmerging ensemble 2017-2018) and I Discordanti (EEEmerging ensemble 2016) with whom he maintains a busy agenda all over Europe, he is regularly invited to collaborate with different ensembles and orchestras both as a singer and a lutenist (Orquestra XXI, Coro Casa da Música, Capella Sanctae Crucis, Troxalida, Agamémnon, La Boz Galana, Domus Artis).
His duo with lutenist Guilherme Barroso won the 2nd prize (1st prize un-attributed) at the JIMA competition (Oeiras, Portugal) in the category of chamber music.
Eager to explore other creative realms in different qualities, he keeps a habit of improvising with contemporary dancers and circus artists and collaborates in different projects.
He wrote the music for the trapeze solo show ‘Planisfério’ premiered at the FIS festival (Póvoa do Varzim, Portugal) and was the selected musician of Rostislav Novak (Cirk La Putyka) for his research group at the contemporary circus festival Die Originale at the Berliner Festspiele in 2018.
Also invested in musicological research from the performer’s point of view, he is currently preparing an edition of the songs and lute pieces found in the ‘Thibault lute manuscript’ (F-Pn Rés. Vmd ms. 27) to be printed by Basel-based publisher Terem-Music.
www.ricardoleitaopedro.com
TICKETS: 100 DKK / Stud. 50 DKK