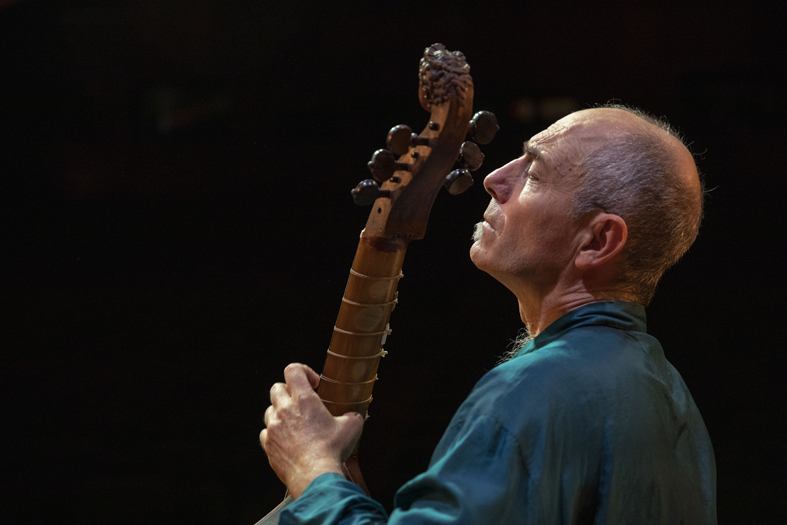 “Loves Past Times”- Locked down in a boundless confinement, wandering through Space and Time…

Paolo Pandolfo began his research in the field of renaissance and baroque musical idioms around 1979 together with violinist Enrico Gatti and harpsicordist Rinaldo Alessandrini. Studied then with Jordi Savall at the Schola Cantorum Basiliensis  in Switzerland.
In 1982 he became a member of J. Savall’s ensemble Hesperion XX and played with him until 1990 throughout the world, and making dozens of recordings (among them Bach’s Kunst der Fuge, J.Dowlands Consort music, Neapolitan Renaissance Music , etc. etc.).
In 1990, after the huge success of his first recording as a soloist (C.P.E.Bach’s Sonatas for Viola da Gamba), he was nominated as Professor of viola da gamba at his alma mater, the Schola Cantorum Basiliensis in Basel.
Since this appointment, he concentrates his teachimg activities in Basel, whilst his performing carrier takes him all over the world, playing with artists such as Emma Kirkby, Rolf Lislevand, Rinaldo Alessandrini, Mitzi Meyerson, Jose’ Miguel Moreno and many others.
Paolo Pandolfo has recorded for radio and television stations world wide, and for record companies such as Astree, Emi, Philips, Erato, Harmonia Mundi, Tactus, Simphonia. Since 1997 all his recordings are by the spanish leading record company GLOSSA. He started his collaboration with them in 1997 recording the first world integrale of A.Forqueray’s “Pieces de Viole“, followed by “The Spirit of Gambo“(music by T.Hume with Labyrinto and Emma Kirkby). His first  unaccompained recital, A Solo, was pointed as one of the best releases of the year 1998 by Gramophone . He dedicated two releases to the M.Marais’:  “Le Labyrinthe et autres histoires“, dedicated to charachter music by the great french composer and “Le Grand Ballet”, focused on his gestures  and dance music. His  trancription  of J.S.Bach’s  six Solo Suites, released in 2000, has been beyond its great success an important musical event and is a “must” in every complete Bach discography.  All his recordings have received amazingly positive reviews as well as many  awards by the most important musical magazines (Gramophone, Le Monde de La Musique, Goldberg Scherzo, Diapason, etc.). The Abel Cd “The Drexel Manuscript” was nominated in 2010 for the Best Year’s Cd in the category “Instrumental” for the BBC Music Magazine.

Last releases for Glossa have been:
-Marais 1689: pieces for one and two viols (with Amélie Chemin) from the first book of M.Marais, including pieces for one viol and two viols
-Kind of Satie: an original project exploring the poetic world of Eric Satie, where he plays a prototype of semiacoustic viola da gamba, with his brother Andrea Pandolfo (trumpets) and Michelangelo Rinaldi (Accordeon, Grandpiano, Toy-Piano)
-G.P.Telemann Fantasias for viola da gamba alone, including the newly discovered 12 Fantasias for Viola da Gamba alone, as well as the D major Sonata from the Getreuer Musik Meister.

Paolo Pandolfo builds bridges between the past and the present, bringing spontaneous and immediate life in the perfomance of baroque and renaissance music using medias such as improvisation, transcriptions and composition of modern pieces, being conviced that the patrimony of ancient music can be a powerful inspiration for the future of the western musical tradition.