Acoustic and electronic soundscapes, visual art, text and choreography are used in the program Dialog/No Dialog.

Athelas Sinfonietta (Copenhagen) and multidisciplinary ensemble Cyberstudio (Tallinn) communicate with each other in this expressive performance of modern music, mostly by currently active composers. 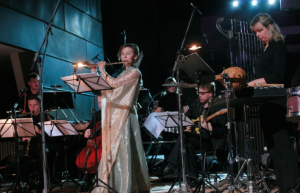 Cyberstudio is multidisciplinary ensemble that is focused on performing music by contemporary Estonian and foreign authors, especially of those related to IRCAM. Thereat the main attention is paid to premieres of works commissioned from Estonian composers, where flute and electronics have the central place. Ensemble’s main idea is synthesis of multimedia, acoustic and electro-acoustic music with other fields of arts, creating thereby new environments in which different means of expression complement and support each other. Thus the light, video, paintings, dance, film, literature and others are roped in Cyberstudio’s projects. Monika Mattiesen, the artistic director of the ensamble: “Almost every modern creative person, may he/she be composer, performer or artist, uses different technological means in creative process. Bonding the acoustic sound to elecronic one and visual to interacive sound and movement has inspired composers, musicians, dancers, theatricals and artists. Cyberstudio is a medium for accomplishment of these possibilities.”.

Ensemble grew out of flutist Monika Mattiesen’s recitals, where the important part was that perfomed works had to be related to the surrounding room in acoustic and visual plan. The first electro-acoustical concert took place at the festival Flutish Kingdom in Tallinn (2000). Since then, light designers, video artists, damaturgs, dancers, actors and specialists of electronic music have become Mattiesen’s ensemble partners.

The preparation of ensemble’s programs is comparable to composing process that source is composers’s work. Often the programs are put together in close collaboration with composers. Since the foundation of ensemble, several exciting multimedia performances emphatically ambitious in a way, have been brouht to audience: Dialog/No Dialog (2001), “Lendajad” [Soarers] (2005), „Eesti fantaasia” [Estonian Fantasy] (2005), Lichtwerke (2005), Long Tide (2006, 2008), “Pärast puudutust” [After Touch] (2007). From the works of foreign authors, Cyberstudio has performed music by many leading new music composers like John Cage, Pierre Jodlowski, Kaija Saariaho, Philippe Manoury, Karlheinz Stockhausen, Brian Eno and many others.

Besides the intensive concert activity in Estonia, Cyberstudio has performed in Finland, Poland, France, Greece and USA. One of the largest project has been concerts in Tartu St. John’s Church at the Estonian Young Composers’ Festival during 2000–2004 within the church’s restoration process.